The Tack Swap Meet. Tack Re-Sell It Day. Tack Flea Market.
Horse people seem to look forward to these events, almost as much as going to the barn or to an event.
One thing about horse people...we accumulate lots of stuff. A LOT!! And we have the urge to purge our tack boxes, tack rooms, trailer dressing rooms, and probably even the garage and trunk of our cars, so we can make money...and buy more STUFF! It is a never ending cycle. As one horse woman said, it is the place where she finds stuff that she never even knew she needed!
When I left my barn in Chuluota in 2010, it took multiple trips to move all my stuff. With owning multiple horses of different sizes, plus running a horse rescue, I had tons of stuff. We all know that saddle pads and bits multiply like bunnies and I had at least 4 tubs of just those items. I mean, I don't even remember buying or using half the bits that I had in my possession. As a confessed saddle pad junkie, I do not deny buying lots of pads, just not that many!
After sorting through the bins and donating much of it to other rescues, pony clubbers and a therapeutic riding school, I still had about 53 totes full of stuff. Give or take. And as I went from owning multiple horses to just one, those totes multiplied. Eventually, you get rid of the stuff and hopefully, your sanity returns and you are able to resist the urge to buy more stuff.
The best way to get rid of it? Why, it is just a matter of time before your local tack store, feed store, rescue, pony club or somebody will host a tack swap.
Spaces usually go fast. At Tack Shack of Ocala, which they refer to as their Famous Horsey Yard Sale, people start arriving at the crack of dawn to secure a primo spot, and buyers are not too long behind. Many times, you can barely unload your vehicle before people are rummaging through your goods. I have actually sold items from my truck before even unloading.
For a tack swap to be a success, you need to try and follow my number one rule, which is DON'T WONDER AROUND CHECKING OUT OTHER VENDORS! Your goal is to leave with more money and less stuff. But it is pretty apparent from talking to others that that rarely happens. They just sell their stuff and buy more stuff to replace what they sold.
Tack swaps are like a reunion of sorts. You see people who you used to board with, people who look familiar but can't quite put a name to their face, former pony clubbers who are now married with kids and old trainers. There is always a bunch of hugging and laughing and everyone is pulling out their I-phones to share photos of their horse.
If you like to people watch, then this is a good place. You can always spot the non-horsey husband. Dressed in his Columbia fishing shirt, hanging a bit behind his wife and usually is carrying all the stuff that she can't live without, while she reminds him of how much money she is saving. Then there are the horsey husbands, who come to your table, asks if you have a running martingale or a Waterford bit and you can't help but feel a twinge of jealousy towards his wife. There are dads with their kids who are trying to convince their darling daughter that she needs the pink galloping boots and doesn't understand the difference between jods and breeches, but it is ok, because he is really trying to be a good horse dad and that is all that matters. There are moms insisting that their daughter buy the $5 breeches to school in and that she does not need another Breyer. Pony clubbers or 4-H kids usually are running the concession stand, there may be a local rescue group displaying needy pups and barn cats (keep walking, don't look unless you are in the market for a new pooch or kitty) and if you venture inside the store...which is usually crowded to the brims, all for the sake of saving 15%, you will probably encounter product vendors. Give away's and raffles are a must of any decent swap meet and if you win a prize, everyone will look at you with envy as you cart off MORE STUFF! 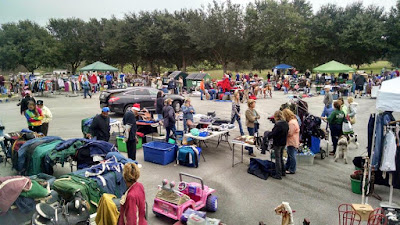 Posted by TheSecretChronicles at 2:22 PM