My war on Tucker's allergies, has been relentless over the years, as I seek ways to relieve his misery. This has meant allergy testing, trying different products and supplements and even moving him from boarding barns where his allergies were worsened due to the location (which has opened my eyes and educated me in my quest for a farm of our own: I know which areas to avoid considering, due to heavy insect populations, either from heavily wooded areas or low lying areas which, when flooded, will lead to an increase in mosquitoes and noseeums).
My initial blog about Tuckers allergies can be accessed here:
http://www.calypsofarmeventers.blogspot.com/2010/06/itchies-habronemas-and-allergies-or.html
All the gory details of his habronema from hell, his wounds that wouldn't heal and the loss of hair are detailed in this account.
It has been 2 years since I wrote that blog, and much has changed, including where Tucker lives and new products that have come into our lives. Time for an update and to tell you about a new product that may be the answer for your itchy horse!
In the 2 years since, Tucker has had 4 different homes. I left the barn I leased in Chuluota, in my attempt to get my horse life under control...driving 30 minutes each way, 2 times a day, 7 days a week for 6 years, not to mention all the money I was sinking into someone elses property, was taking its toll. I downsized, closed my horse rescue (mainly due to lack of money and other resources) and found a barn that, while it was just as far a drive, it required me going only once a day. It worked for a while. We had no major issues with Tucker's skin at that barn and things were going well until I moved to another barn which unbeknownst to me, was a hotbed for noseeums....lesson learned, always check out a potential barn on more than one occassion, and at different times of the day. The bugs were not bad at 9:00 in the morning when I first looked at the barn. However, when we moved the horses a few weeks later, in the afternoon, we were attacked almost immediately. The owner claimed they had never been so bad, but I am sure she was just saying that. We moved a month later.
We left another barn because of the noseeums and mosquitoes. He was being tortured, refusing to leave the confines of the overhang of the barn to go join his pasture mates in the field. He prefered the annoyance of the stable flies to the noseeums and mosquitoes that appeared after a rare deluge of 10 inches in the fall, which awakened a neverending blood seeking supply of the nasty creatures. I had to move Tucker.
We are now back where I was for 5 months last year, in an area that is mostly suburbia with a few farms left over from another era. One side of the pasture is boardered by residential homes and there is a middle school at the end of the lane. Lawns are manicured and treated for pests. It has made a pretty big change in Tucker's skin, though not a 100% improvement. He is still itchy, particularly his mane and tail, and he has devolped hive like bumps along his shoulders. Also, he reopened the spot on his nose...out of the blue, I came out one day to discover a bloody spot, covered by what seemed to be every fly on the property. I have been keeping the spot covered in the Equiderma/diaper rash ointment, and I learned that if I put TWO fly masks on him, I have a 50/50 chance of returning in the evening to find that he is wearing at least one of them! This week I noticed open sores along his mid-line. I already started him on Smart Pak's Bug Off at the beginning of April, and now he wears his fly sheet at night.
Last week, I ordered a new product from Hilton Herbs, called Bye Bye Itch. I had tried Wendalls Herbs Stop Itch years ago, but stopped after I realized that not only was it not working, but Tucker's allergy test revealed that he was allergic to dandylions, which was an ingredient...no wonder it wasn't working! Just by chance, I saw an ad for the Bye Bye Itch and so I looked it up on their website.
http://www.hiltonherbsusa.com/products/bye-bye-itch/1284 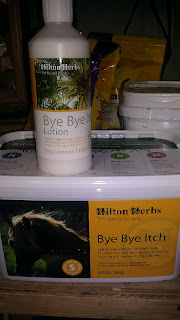 I was impressed that they had included a trial video and the trial data. The results looked promising. I was worried that it contained flax, which was also on Tucker's list of allergens, but their flaxseed is cooked, something we have never tried. It also contains brewers yeast, vegetable charcoal, buckwheat, nettle,  and diatomaceous earth. I decided to give it a try, as well as ordering the recommended Bye Bye Itch lotion, which contains coconut oil, aloe oil, msm and other essential oils.
http://www.hiltonherbsusa.com/products/bye-bye-itch-lotion/1285
It arrived 5 days ago. The supplement is a white gritty powder mixed with herbs. The smell is somewhat pleasant...moreso than the Bug Off. At Tucker's size, it is recommended he get 6 scoops a day, which I have broken into 2 feedings. As with most new products, he was a bit skeptical and didn't exactly lick the bucket clean, but he did polish it all eventually.
I applied the lotion to his tail, which has been rubbed raw at the base. DAMN! I wish I had taken a before picture. With just TWO applications, I realized this morning...HOLY CRAP...his tail has regrown in by more than 50%...after just 2 applications over 4 days. Then, I started going over his body. The welts on his shoulders? Gone by about 90%. There are just a few bumps and they are barely visible. Last night, I was a bit rushed, as I raced to get stalls done before an approaching storm....did I see him itching his mane? Defintely not as much, I realized, and the scabs at the base of his mane are gone. And his nose? Definitely looking better. The sores under his belly? Usually they volley back and forth between scabs and oozing sores. Today? They are dry, no scabs and on their way to healing!
Have I stumbled upon the miracle solution to Tucker's allergies? Well, let me just say, that after less than a week, the results are pretty staggering, and definitely impressive. I am, for the first time, excited that I have found product that will give him relief.

In other skin updates, the habronema is still holding the same as it has for the past 2 years. It has been ages since we have seen the open, granulated, bloody mess that we dealt with for so many years. As soon as the season becomes warm, Tucker wears a fly boot on the leg to cover it. It is interesting that while I can put fly boots on all four legs, he will remove all boots except the one on his left front which covers the habronema scar! He apparently understands the importance of keeping it covered. It may never regress, but that is a chance I am not willing to take. 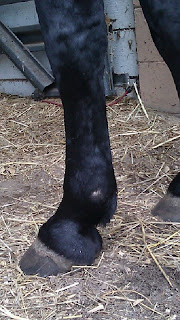 I realize I can never let my guard down when it comes to Tuckers allergies. He still gets his allergy vaccine every month and in the summer, he wears his fly sheet. He is bathed weekly with Eqyss Medicated shampoo. At the first sign of any hair loss or open sore, it is treated aggressively. Through micromanaging, I have reduced his allergy season from 6-9 months of sheer hell, to about 2 months. It has been 2 years since I have had to lather him from head to toe and from chest to sheath, with ointment every day and night. Overall, this has made for not only a happier horse, but a happier horse mom!
Posted by TheSecretChronicles at 10:29 AM