An Update On Tucker's Skin Issues!

A lot of my blogging in the past has been about Tucker's skin issues. A lot has happened since I last blogged about his skin.
So, when I left off in January of 2014, I was still dealing with Tuckers summer sore from hell, which had reopened in the fall of 2012. Through my research, I found that Dr. Porter of Performance Horse Vet had a cream for treating habronema's. Because I had used him years before for Pilgrim's neurological issues when Dr. Porter was with the U of F mobile unit, he graciously sold me a tub at a cost of about $80. I had strict instructions to keep Tucker bandaged for at least a month, a feat when you are boarding, but thankfully he is a couch potato when he goes outside and he left his stable bandages alone while turned out. The sore did close, but did not give me a 100% success rate that I had hoped for, more about 80%, but that was better than nothing.
So after about 3 months, the sore did close and we were in good shape for the summer heat and flies. The sore stayed pretty much the same through the summers of 2014 and 2015.
Fast forward to this past December. The weather was cooling off and I allowed Tucker to go outside without his fly boot on.
I literally cried one day when I arrived at the barn to find his leg bleeding.
The sore had reopened.
Hilton Herbs had come out with a new product the year before called Mud Defender. Hilary trialled in in the US and the UK with amazing results. The supplement and lotion are designed to treat scratches and rain rot and every horse in the trial had an improvement, in that they either did not come down with a case of scratches or rain rot, whereas in previous years they had, or if they did, their owners reported it was a much milder case.
I was having pretty good luck with the topical Mud Defender, with glowing results from whomever I gave a sample to. Bloody, crusty ears in a fellow boarders boxer: healed after 2 treatments where the vet's steroid medicine had failed. Crud on the front of a horses back legs: healed. Rain rot in another boarders horse: gone in days. The crusty collarettes my male German Shepherd gets: gone. I had given a sample to a friend who had been trying to heal a summer sore on one of her horses, with no luck, despite 6 months under the care of a vet. She called me the next morning, wanting to order a bottle and gushing over the results of just one treatment! The summer sore healed up in 3 weeks on the Mud Defender!
So while I was very bummed about Tucker opening his sore up, I was excited about using the Mud Defender on him and I even put him on the supplement, which is designed to toughen the skin, support the elasticity and integrity of the skin and support the body's overall immune response to infection.
The sore was healed in 3 weeks!
As of now, the sore looks great. It was interesting to photograph the sore on a daily basis while treating with the Mud Defender and to see the changes that occurred almost daily. The skin integrity has definitely changed for the better
and I am hoping it stays closed for good, but of course, I will continue to micro manage the hell out of it.
Meanwhile, the rest of Tucker's skin looks pretty good. Besides starting him on Hilton Herb's Bye Bye Itch, which I after 3 years, I can increase and decrease depending on the pollen, weather and bugs, the best decision I made was to keep Tucker inside at night. It means that I have to drive nearly an hour each way to the barn in order to find a barn that will accommodate his schedule, but it is worth it. When the pollen count is high, usually spring and fall, he does tend to get hives, but overall, his itching has decreased dramatically. He has had a full mane and tail for 3 years, and he no longer has raw, bloody scabs all over his body. 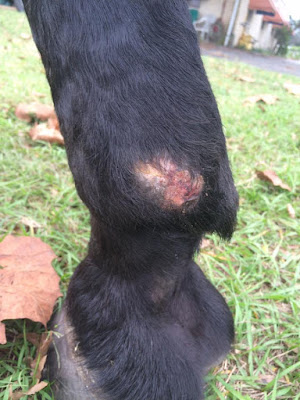 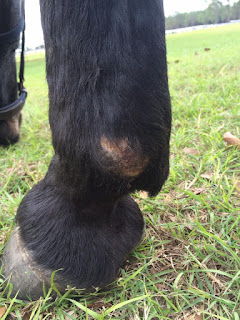 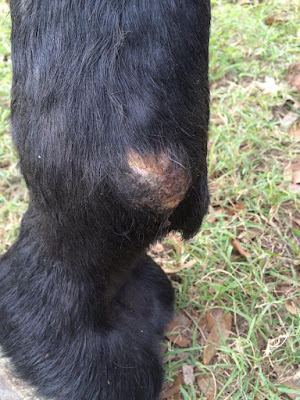 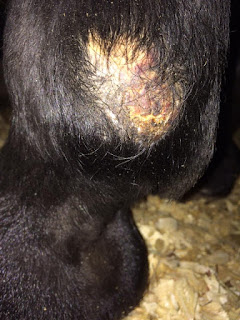 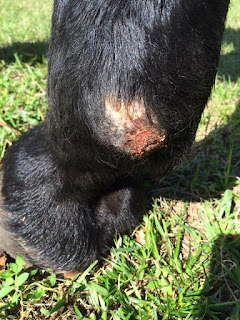 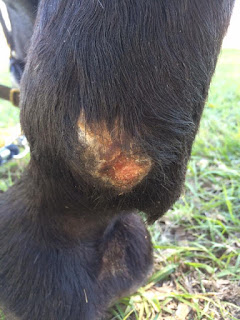 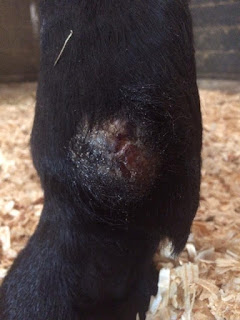 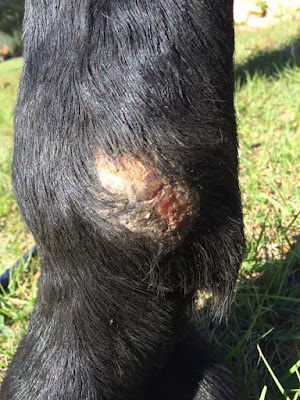 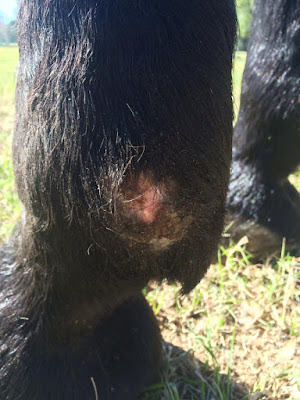 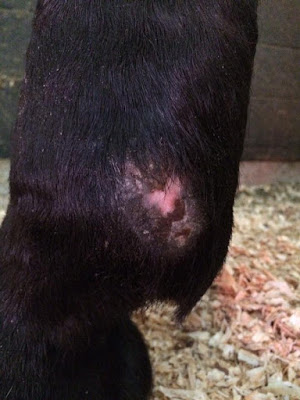 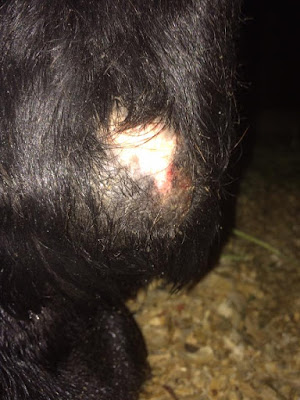 Posted by TheSecretChronicles at 9:07 AM