Just Another Blip In The Road

So a few days ago, Tucker was diagnosed with arthritis in his left front ankle, and I have been wracked with guilt and frustration ever since.
You see, last fall, when he had an issue with the same leg, which was the result of striking the stall wall in retaliation of a new stall mate, the vet told me then that she saw a bit of arthritis in the ankle and suggested I put him on Cosequin. Which I did.
I also started him on Hilton Herb's Multi Flex, but in the liquid tincture formula, because he gets so many dry supplements for his EPSM and allergies.
He was on Cosequin for about 3 months but I stopped around the end of January and just kept him on the Multi-Flex. My reasoning was that he was just getting too many supplements and I had read the many arguments against joint supplements because most of the ingredients are not digested, that it is a waste of money. I was a huge fan of the joint supplement Gluquestrian, which does not contain all those wasteful fillers, and I attribute that product to keeping Imp sound when she should not have been, but it is hard to find. I kept telling myself to order it online but in the end, I decided to just go with the Multi-Flex.
But then I entered the recognized event at Rocking Horse, and I stopped the Multi-Flex because it would test for the devils claw (by the way, Hilton Herbs is working on a competition-legal line of products, which are now being tested in the UK.) Honestly, arthritis and unsoundness were not even on my radar when I stopped it.
And then, a few weeks later, he was lame.
Coincidence?
I pride myself in the care that I give my horses and that they are sound and healthy. Tucker has been one of my most challenging horses, between the EPSM, allergies and habronemas. I have to keep him micromanaged.
All I have wanted to do is event Tucker. One of the reasons I adopted him rather than buying another OTTB, was that while the girls were actively showing, I could concentrate on them and not have the show expense of my own horse. Jen would be graduating high school and off to college by the time I was ready to get serious in competing.
But life throws you curve balls. In my case, it was a blood clot in the leg that left me weak for a year,

then unemployment/budget constraints and just as we were ready to finally hit our stride, Tucker is diagnosed with EPSM. The first round, we got it figured out pretty quick, but then summer arrived and I don't do summers. Not in Florida. A quick ride in the morning and I am done for the day. Another round of unemployment, then another round of EPSM, this time more debilitating and once we figured out the missing pieces of his diet, it took nearly a year for Tucker to recover. And now that we are finally ready, we have another setback.
Tucker was all ready for Rocking Horse until he trotted lame on Thursday, with the show on Saturday. Kevin, my farrier, came that afternoon, as he had reset Tucker on Wednesday, but hoof testers revealed nothing.
Over the next few days, Tucker alternated between head bobbing lame on a 10 meter trotting circle, yet almost 100% sound on the 20 meter, to off every 7th or 8th stride on the 20 meter and almost sound on the 10 meter. I fired off an email to Dr. Reilly to ask if he thought it could be EPSM related, and he was pretty sure it wasn't.
The vet arrived Friday and Tucker was a trooper. Trotting him down the driveway, I could hear the uneven foot falls without even looking to see that he was off on the straightway. We decided to nerve block him and while distracted with Hilton Herbs Herballs, Tucker was numbed, first the hoof and then, when he was still lame, the ankle. This time, he was sound when I trotted him around.
The diagnosis is arthritis, and tomorrow we will confirm with x-rays and compare the new ones to the ones taken last fall. The vet was relieved it wasn't anything more serious and I guess I should be as well, but I am still feeling guilty. The vet felt that given his size and being almost a teenager in another month, this is about the time to see something. But should that be normal? It isn't like I am an eventing warrior, taking him cross country every week or even jumping him at home weekly. Quite the opposite. Because of his size, I didn't even start him under saddle until he was 3, and did not jump him until he was almost 6, and yet here we are, still getting arthritis before he is 13. Maybe I should have added a joint supplement all along, and perhaps we would have been able to compete last weekend. I guess we will never know. 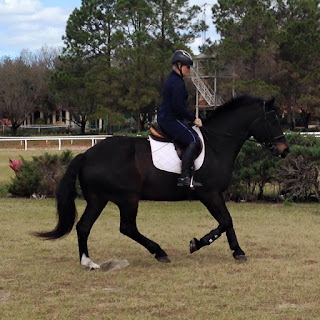 I know that this is manageable, and we will start with Adequan,and he is back on the Multi-Flex. But I wonder if I should have taken this a bit more seriously back in November and when I took him off the Multi-Flex, perhaps I should have had a back up plan.
And so once again, another eventing season has come and gone and with us ready to attack it, we have once again been sidelined. Maybe someone is trying to tell me something?

Posted by TheSecretChronicles at 7:22 AM