UPDATE: 1/14/2020: Horse owners are being vigilante! Please visit Florida Horse Watch Group and Keeping Florida Horses Safe on Facebook for updates. Because there are so many reports, I am no longer going to try and post about every single one, therefore, I highly suggest following these two groups to stay informed. I suggest printing out the flier on the Florida Horse Watch Group page (go to files) and ask local stores to post in their windows. Also, talk to your UPS/Fed Ex driver, mail delivery person, neighbors, etc and tell them what is going on and to be on the look out for anything out of the ordinary.
UPDATE: 1/6/2020: Zephyrhills: barn owner reports dog was beaten and 2 horses had rope burns. Breaker box was turned off, lead ropes trampled in stalls, barn in disarray. Three sets of boot prints, one female and 2 male. Sheriffs office notified.
UPDATE: On New Years Eve, a woman scared off possible horse thieves from a barn near I-10 in Glen/Macglenny. West of Jacksonville. Police were called but suspects escaped.
UPDATE 12/23/19 2:19PM: My barn owner observed and videotaped a blue Camry driving slowly along Leslye Lane in Eustis, off of 44A. This car was pulling into driveways. They sped off when they saw they were being videotaped. Windows are heavily tinted. Pictures below.
UPDATE 12/23/19:
Horse owners are reporting that they are seeing suspicious activity, from Plant City, Geneva, Sorrento Brooksville and Lakeland. A common denominator is that the person, who is usually Hispanic or Middle Eastern (and one woman, see photo below) comes to the property under the pretense of wanting information about riding your horse (not necessarily taking lessons but wanting to ride) and taking photos "of the pretty horses." Several have reported seeing a light blue Toyota Camry. This was seen in Geneva and in Sorrento. Also, see photos below about possible suspects in Plant City.

Stealing horses out of their stalls and pastures, butchered and remains left behind for the owner to find. This is sadly, a common occurrence in South Florida. Several monsters were caught and sentenced to jail terms, but sadly it is a larger situation than just 2 individuals. Because it was happening so often, Animal Recovery Mission (ARM) was founded to help combat the problem.
From time to time, a horse would be found butchered outside of Dade County. When Phedras De Blondel, a half million show jumper was discovered butchered at the Palmetto, Florida farm of Steve and Debbie Stephens, the news media took note. The warmblood had just been imported and had been at the farm only a few days, having been in quarantine. That was in October of 2015.
Fast forward to this past Thanksgiving. A chestnut gelding named Hot Rod was discovered missing from his pasture south of Ocala. His owner, Tammy Davis, found the butchered remains of Hot Rod close by.
Then, a horse was stolen and the remains found on December 2, just 2 miles from the Stephens farm in Palmetto. Surveillance video captured a person of interest, but even with over $10,000 in reward money being offered, there has been no arrest made as of yet.
Then on December 11, Jayda, a beloved family member, was found butchered near her pasture in Webster Florida.
In addition, several horses have been reported missing over the past few months, including a bay horse in Oxford, just south of Ocala. Not only that, but there was an attempt of a horse being stolen from the Florida Horse Park while being stabled for one of their horse shows. Police were called, but nobody has been arrested in that case either.
So what do we do to keep our horses safe?
Plenty.
First, the obvious. Install motion sensor lights and motion activated surveillance cameras. Get the kind of cameras that alert you to movement. If you have an alarm, use it! But don't install it near windows where anyone can see whether or not it is set.
Post signs! Thieves will typically keep going if they see signs warning of security cameras and/or dogs.
Thieves don't like noise. So get a goose or 2. A donkey is another deterrent. And of course, dogs.
If you have wire fencing, if possible, consider replacing it with wood fencing. Especially back pastures that have easy access to roads. Patrol your pastures daily. Look for fresh tire marks where there should not be any. Look for cut wires, trampled bushes and other signs of someone scoping out your property.
Plant thorny shrubs along your fence line and make the fence line as inaccessible as possible.
Get to know your neighbors! Look out for each other. Tell them that if they see anyone leading your horses or attempting to load, do not assume that it is alright. It's ok to be nosy!
Vary your routine. Thieves like orchestrated schedules. If you are gone, consider timers to turn on and off your lights and tv at different times. And if you are gone for an extended time, make sure your mail and papers are collected. Is it snowing? Ask a neighbor to make fresh tire tracks in your drive way.
Many thieves canvas farms by posing as potential boarders, students, etc. I would seriously consider asking to see their drivers license and take a photo of their car tag. Don't assume that women and even adults being accompanied by children are safe.
Treat your horse as if he is your child and follow the same safeguards on the internet. Don't reveal locations of your horse. Remove your address from websites and other social media pages. Don't reveal that you are leaving town on social media.
Lastly, be diligent. Don't be afraid to report anything suspicious. Don't take for granted that the person waving to you while loading your neighbor's horse is supposed to be there. Better to call the police and let them decide. And don't be afraid to ask your local police to step up their patrols.
Lets hope that arrests are made soon and this problem goes away. I am encouraged that these 3 cases in Central Florida have gotten the attention of the news media. But in the meantime, everyone needs to be proactive. 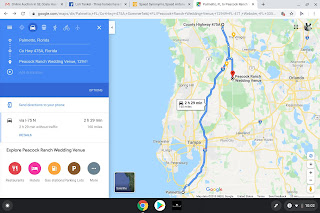 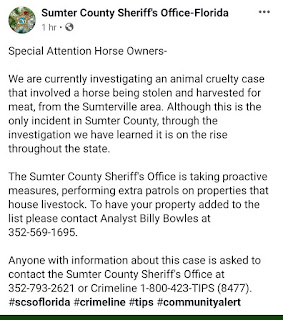 New details. Please keep sharing and alert your local law enforcement if you see anything that is a possible lead, no matter how small: 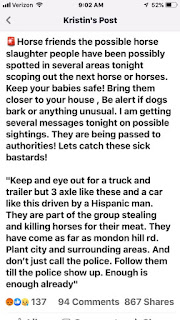 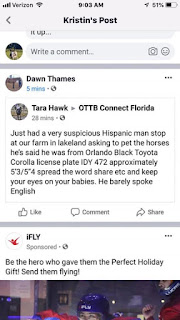 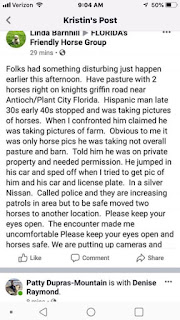 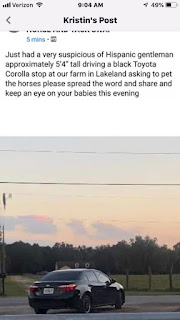 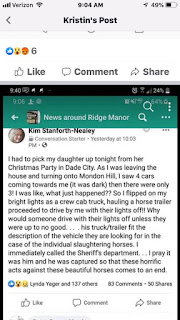 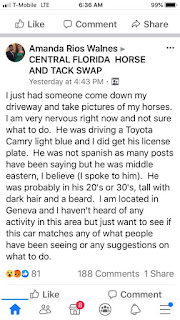 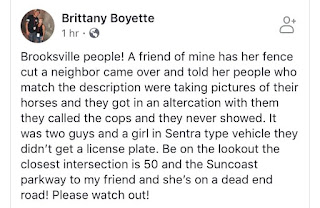 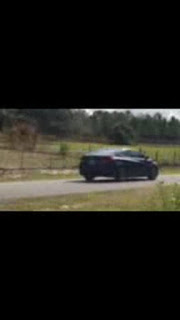 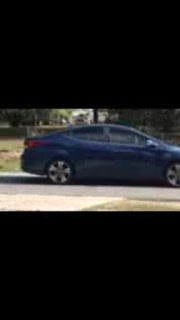 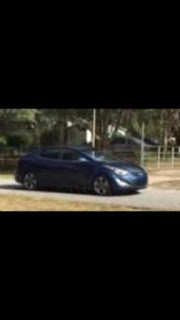 Posted by TheSecretChronicles at 1:30 PM