Why Are We Showing In The Heat? But We Did It!!

As I blogged last week, I had entered Tucker in the Rocking Horse Stables schooling trials. I had missed the winter season and summer was upon us, and I really wanted to attend, 1) so we could say we had finally gotten to a trial this year, 2) to focus on show jumping and dressage and 3) so we could push ourselves a little in the heat.
I hate the heat. I hate Florida, and I hate summer in Florida. Since menopause, it has gotten harder and harder to tolerate the heat and there is nothing more torturous than trying to ride when it is 95 degrees out and you are experiencing a hot flash! I admit I am a total wimp when it comes to the heat. I will take snow and ice over the heat...and yes, I am from the north, so I know what winter is like.
The week leading up to Rocking Horse was actually decent, but of course, Saturday morning, the day of the show, summer officially arrived and it was just plain miserable, even at 9am as I was loading Tucker. To make matters worse, I had eaten something the night before that disagreed with me and I had a good case of show jitters. Not a good way to start the day.
We arrived at the show and as luck would have it, they were behind schedule in the stadium ring. Figures.
We did a short warm up...the sweet thing about Tucker is that he doesn't need much jumping. He is uncomplicated and thankfully, we can get the job done without a lot of sweat before hand.
I had entered the 2'6 and 2'11 classes, with no expectations, other than to work on my form, our leads and my head game. I used to love jumpers, did it for years on my Sir Tally, but being out of it for years started to cause my brain to play mental games....I am always worried of making a total fool of myself, whether by missing a distance, knocking a rail or just by having bad form. Watching the 2' class erased most of those fears, as I watched some really bad rounds. I only hope that they were beginner riders, but shame on their trainer for bringing a rider to a show who has no idea of how to release and is yanking the mouths of their mounts.  I felt pretty confident as I entered the ring, but had absolutely no expectations, other than to enjoy the ride.
And we did, as we hit every distance. We didn't get every lead, but I had the presence to ask for simple changes and get them. We didn't have Marcea school us, but I think I did her proud and followed her instructions for riding into the corner and flexing him to the outside, which helped for a straight approach. All was great until about the 3rd from last jump, when I think Tucker and I both had the same revelation, which was that it was wicked hot and what the hell were we doing? I decided in a split second that I had nothing to prove to anybody by trying to ride in the heat. We somehow finished the last three jumps, though I doubt it was pretty! We finished clean.
By the time I got back to the barn, to wait for the next class, which was an hour away, I decided to scratch. I was hot and light headed and feeling a bit miserable.  I was pleased with how our class had gone and decided to just ride our dressage test.
Thankfully, there was a bit of a breeze for our test. We rode BN B. When we finished, the judge asked me what size circles I was doing. She said that they weren't 20 meters but that they weren't 15 meters. I just laughed and patted Tucker as we exited. I thought our circles were on the mark, but who knows? We did receive a 33 for our test, a personal best, so I was happy.
When I went to collect our test, I took a gander at the results board. While we were just out of the ribbons for our test...first place was a 24....we did win the jumper class!
And what did I wear? Well, lucky me, my Devon-Aire Signature Granada field boots arrived on Thursday. I have been riding in boots that are a size too big and didn't realize how much it affected my leg until I rode in the new boots! What a difference! And they are so comfortable! They felt completely broken in on Saturday. I wore my tan Madrids and the navy Ariat shirt. I think I looked pretty fashionable! 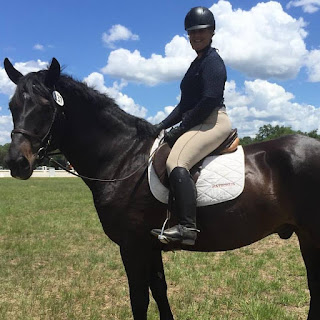 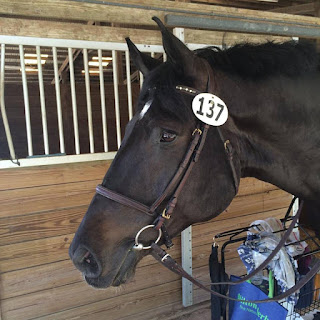 Posted by TheSecretChronicles at 1:34 PM