Words really can't express how well Tucker has done, not nearly as much as pictures (as they say, a picture is worth a thousand words!), so I will keep the writing to a minimum and let the pictures do all the talking!
Tucker has been on Hilton Herbs for a little more than a year now.
He gets the Bye Bye Itch supplement and I started him on the Echinacea for immune support last month. I use the BBI lotion as needed, and I alternate between Eqyss Medicated shampoo and the HH Coal Tar, Neem and Tea Tree shampoos.
I would say, on a scale of 1-10, with 1 being horrible and 10 meaning his skin is perfect, I would put him at a 7. Which, for this time of year, is amazing. Usually, by July, he would be at a 2. Normally, his midline and sheath are raw. He has no mane and his tail is rubbed out. His face is raw, as are his ears, neck and chest.
As of yesterday, he had some bumps along this sides. They are bug bites, and I would love to find out what kind. Today, the bumps were much less swollen, but you could see where the site of bite/sting is with initially, tiny scabs, but today, just bare spots, if that makes any sense. He has never had these kinds of bumps before, and since we are at a new barn since last summer, they must be some super bug, as they are very large (cherry size) and have a scab in the center. They are sore to the touch.
He has some tiny bare spots along the chest and neck, but they are not sore, or bloody.
The biggest issue is his habronema, which for some unexplainable reason, opened last fall, within weeks of moving to the new barn. I attribute it to being environmentally related and something in his field which has caused it to re-open. It has always closed up in cooler weather, and after being closed for several years, it has been a source of frustration to not be able to close it at all this year, even during the cooler weather. After trying many different medications, including the DMSO/Ivermectin/Fura mixture, to no avail, I am having a small bit of luck with a human ointment for bed sores, made from Manuka honey, mixed with Quest dewormer. Not a huge amount of luck, but there are subtle improvements, more than with any other medicine.
As I was trimming Tucker's mane a few weeks ago, I realized that for the first time in I can't recall how many years, I could actually let his mane grow out! It is full, soft and there are no scabs along the base! Same for his tail...it is full and lush!

Pictures from the past:

Now look at the differences this summer!!!! 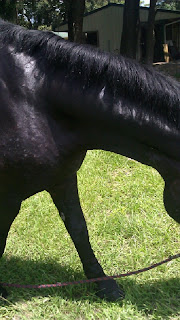 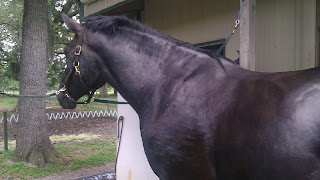 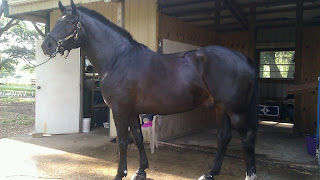