Why Does My Horse Choose To Be " OFF" When The Weather Is Nice Out? 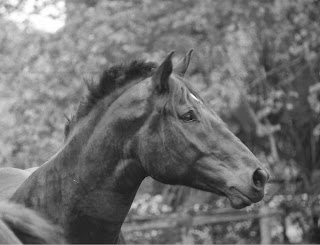 So about 10 days ago, I noticed that Tucker wasn't quite right when I rode him. I could not pin point the exact cause, but he was reluctant to canter, especially the right lead, and he did not want to maintain the lead for any amount of time.
His trot has been absolutely gorgeous though...lots of  impulsion, he is rounded and forward.
What the hell gives?
He obviously isn't lame. He is sound at the walk as well as the trot. But that canter...it isn't quite right.
I traveled all of last week for work, hitting my stores in Atlanta and South Carolina, so he had 5 or 6 days off. Unfortunately, having that time off made no difference, as he was still reluctant to canter when I rode him over the weekend.

Ok. Do I call Kevin, my farrier extraordinaire? It has been wet/dry/wet. Maybe an abcess is brewing.

Or is it structural? Do I have the chiro out? Tucker has new playmates, maybe they were playing rough. Unfortunately, Charlie won't be back in Florida until November.

Or is he really lame? Should I have Doc out?

After mulling this over for days, I wondered if Tucker could be having a relapse of EPSM.

Two and a half years ago, Tucker was "off" but not lame. I didn't want to call the vet, because I knew he wasn't going to see what I was feeling. He was pissy to girth, reluctant to canter and then the final straw, he bucked at the canter....most unusual behavior for Tucker. If someone not familiar with him were to ride him, they would not notice anything wrong. But I have had my Tucker since he was 6 months old, broke and trained him myself. I knew something was not right.
After having his teeth checked, saddle re-flocked and Charlie out (who found just a minor point out of whack near his withers...."horses like Tucker's build generally don't need a chiro," Charlie told me then,) Tucker was still not better.
Then, I had an "ah-ha" moment, and wondered if he could be showing symptoms of EPSM.
Equine Polysaccharide Storage Myopathy is a muscle wasting disease that affects draft horses. Affected horses fail to digest grains properly, which results in damage to the muscles during exertion. It also affects Quarter Horses, where it is referred to as PSSM. Double whammy for Tucker...he is Quarter Horse/Percheron.
The best way to confirm EPSM is by biopsy, but since Tucker has an issue with wounds healing, especially in the warmer months, and we were already approaching spring, I did not want to risk it. Blood testing is not 100%.
So, I opted to change his diet and see what would happen.
Dr. Beth Valentine, DVM, is credited with being the first vet to come up with a successful treatment for EPSM. Way back in the day, when draft horses were common fixtures on the family farm, the horses would typically work 6 days a week and then rest on Sunday. Come Monday morning, it was not uncommon for them to be stiff and off. This became known as "Monday Morning Disease." (Funny, this is what my mom referred to me as having when I was reluctant to get up and go to school on Mondays!)
Dr. Valentine determined that unexpected changes in work or diet can cause horses to lock up or over conserve electrolytes, causing failure of normal neuronal controls. This translates into horses being unable to effectively digest starches and sugars from grains.
Dr. Valentine developed a diet specifically for EPSM horses. Her theory is that horses gain no nutrition from grain, other than calories. She proposed eliminating starch and sugar calories with fat based calories.

As I said, there are 3 ways to confirm/diagnose EPSM: biopsy, blood and diet.
I opted for the diet and added 2 pounds of Seminole Ultra Bloom, which is 20% fat, to Tucker's diet of Seminole Ultra Dynamix (14% protein, 8% fat) and alfalfa/orchard/timothy hay. Because of Tucker's allergies, including to beet pulp, I had never fed him a traditional EPSM diet, since most high fat feeds contain beet pulp. The Ultra Dynamix, which is oat based, was a good compromise (or so I thought. Obviously, he needed more fat.)

Within 2 weeks, Tucker was 100% his normal self. It was nothing short of amazing how changing his diet just a little bit had such an effect on his body!

Ok, here we are 2 and a 1/2 years later. Tucker is being "off" again. And after mulling it around, I think he is relapsing with his EPSM.
After doing some research, I was put in touch with a Dr. Frank Reilly of Equine Medical and Surgical Associates in West Chester, Pa.

His theory is that horses do not get enough Vitamin E.
According to his website:

-Horses store little Vit. E in their bodies, so they need it daily in their feed
- Hay has little or no Vit E and grains do not meet requirements
-In winter, with little to no pasture, studies show horses go Vit E deficient within 30 days
-Vit E levels are lower in exercised horses
-6 months a year, Vit E is at low levels in pastures. Horses need 24 hours a day on pasture to get the amount of Vit E required even at peak grass levels. Most horses are on pasture less than 24 hours or are on dirt
-Vit E helps blood flow to feet
-Vit E deficiency leads to multiple neurological diseases
-Vit E is the main antioxidant in the body to prevent inflammation
-Vit E deficiency is linked to shivers, PSSM (EPSM)  and muscle soreness

I asked him if horses can relapse with EPSM, even if on an EPSM diet, and he said that unless they are getting a minimum of 5,000 IU of Vitamin E daily, then yes, they can relapse.
Through several emails and a phone call, Dr. Reilly suggested that while the diet I had Tucker on was good, it needed some tweaking.

His plan is for me to reduce the Ultra Bloom by 1/2 pound and add a pound of Seminole Equalizer Balancer. This will add a low carb/high protein balancer to his diet. Even though the Ultra Dynamix is higher in carbs, he said to keep using it but the Equalizer will offset that.
He suggested the use of a hay net for when Tucker is stalled during the day. Slow eating of hay will insure that sugar surging is not happening, which leads to muscle problems.
And lastly, add Vitamin E. He suggested Health E Max, which is 16,000 IU and does not contain Selenium (feeding selenium is risky. Tests should be done on pasture grass to determine selenium levels, as too much can cause selenium poisoning.) I am to start Tucker at 17,000 IU daily for the first week and then eventually get him down to 8700 IU maintenance level.
He also informed me that The University of Minnesota will test EPSM with hair samples. I am going to look into that!

So I started Tucker on the Equalizer last night. The Vitamin E arrives next week. Dr. Reilly thought that I should see an improvement in 2 weeks. I am to continue light riding in the meantime, so I guess we will be hitting the trails. Yippee (not).
The weather is changing...it is less humid and fall is coming. Horse trials are gearing up. Why couldn't this have happened in July, when it is hot and humid and I could care less about riding? ARG!

.
Posted by TheSecretChronicles at 8:16 AM