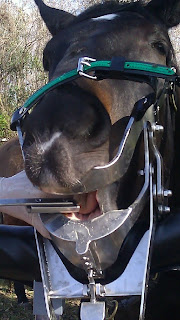 Sometimes being a horse owner means that you have to play detective.
What on earth did my horse just rip his eyelid open on?
Why is my horse limping? Is it his right hind or the right front leg?
Why is my horse not eating all her breakfast?
Why on earth is my horse suddenly spooking at the woods?
Why?
Why?
Why?
For me, the answers to the above are:
1) Don't bother looking, you will never find the source
2) Hint: look for the head bobbing
3) If it is Imp that is off her feed, that is normal, but I still want to know why, and I still have no clue, just ideas
4) Because there is an armadillo rooting around....yes, I came nose to nose with it last week, and Imp heard it the minute she stepped foot outside the barn!

My latest mystery involved Tucker. I have spent alot of time exploring the mysteries of Tucker's allergy sources, and the best way to manage them. But riding him has always been an uncomplicated breeze, until about a month ago.
Off and on for the past 8 months, he has been a bit pissy about saddling him. Not girthing him, but the act of setting the saddle on his back. It was puzzling me. Was the saddle hurting him? Was he associating the saddle with something I was doing on his back that he didn't like?
For several months, the behavior stopped. Then, it suddenly reappeared last month.
I contacted my chiropractor. He came out and was surprised that a horse of Tucker's build would be having back issues. It took a few searches, but the source of pain was located in his withers, the T4. Normally, for this area to be out of alignment, means that either he rolled on something, or was roughhousing with another horse. Since he had been exhibiting displeasure for several months, I attributed it to his playing with his buddy Tyke, when they were stablemates. (No way it could be Imp...she doesn't participate in such juvenile foolishness!)
Tucker was good for a week. No more pinning his ears back as I tacked him up. Then, one morning, he really had an attitude as I placed the saddle on him. Ears back, his tail swished and he backed up and away. Perplexed, I finished tacking him, giving him a peppermint to divert his attention away from the saddle. As I rode him, he was reluctant to move forward. As I asked him to canter, he produced a rare buck.
I immediately pulled him up. Not because I was intimidated by his bucking, but because I knew there was something seriously wrong.
In my book, there are 3 things that can cause sudden balkiness while under tack: a sore back, a poor fitting saddle (which can cause the back to hurt) and/or an issue with the teeth.
Since I had the chiropractor out, I decided to address the next two possibilities.
First, I had Bob Stockman, of Stockman's Harness Shop, come out and inspect the saddle. He had originally measured Tucker and fitted him for his extra wide Stubben Siegfried when Tucker was 6. He determined that the saddle needed some reflocking. Thankfully, there were no changes with the tree. He took the saddle with him and promised to have it back to me in less than a week. The following day, the vet came out and floated his teeth.
Tucker was sedated and the vet placed a gag in his mouth and lifted his enormous head onto the stand, which gave us a clear view into the deep reaches of his mouth. It is very educational to be able to stick your hand into a horses mouth and feel the teeth, gums and tongue!
He had some waves, and there were a few sharp hooks, which were creating an ulcer along the side of his mouth. Thankfully, that was all. Within 30 minutes, his sharp edges had been removed, the waves had been evened out, and he was on his way to waking up.
I picked up my saddle and rode him on Tuesday. The saddle felt brand new again. There was some attitude as I placed it on his back, but I attribute that more so to conditioning and preparing himself for pain. The real test would be when I rode him under saddle.
I am pleased to say, my Tucker is back! We had a pleasant, although a bit strong, ride. He was forward and right on spot with his canter departures...in fact, his departures were even better than they have been in recent months! There was no bucking, no ear pinning, as we worked on leg yields, canter departures and circles.
Was it the teeth floating or the saddle reflocking? Since both were done at the same time, I will never know. Perhaps it was a combination of both.
All I know is, I am glad to have my old Tucker back! And all it took, was a bit of detective work!
Posted by TheSecretChronicles at 9:44 AM