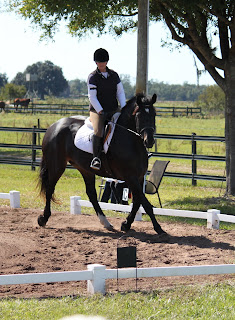 Did you know that vultures don't like their image in mirrors? Now you are probably asking yourself, "When does a vulture ever see itself in a mirror?" Well, vultures circling about Adagio Farm in Geneva have that opportunity, thanks to the mirrors alongside the dressage ring. And according to Bruce, sand hill cranes don't like their image either. When I arrived for my lesson this morning, I was greeted by the spectacle of a dozen or so vultures hanging out around the mirrors. One, in particular, was having a one sided fight with himself. Apparently, this is a common occurrence. And the scratches along one particular mirror, Bruce explained, were from the sand hills attacking their "enemy."

Its funny...some horses notice themselves, others don't. Tucker didn't blink an eyelash the first time he saw the mirrors. Jen rode Imp over and Imp didn't react, having seen mirrors before, however, each time she passed alongside them, she would pin her ears. I guess horses are like humans...obviously, from the bare muffin tops and tight clothes, there are quite a few women who don't notice their appearance in a mirror!

Our dressage lesson was great! Bruce is very generous with his praise. We have been working diligently with our leg yields, shoulder support and keeping Tucker round and balanced.

"Don't worry about his head," Bruce told me. "Instead, keep him balanced and collected..the head set will come." And sure enough, by the end of our session, Tucker's head was flexing at the poll, coming on the vertical!

We worked more on leg yields, spirals and canter departures.

There is some communication problems however! Bruce, despite his eventing background, speaks dressage. I however, speak jumper and eventer. Just where the hell is the quarter line? And what do you mean, do a change of direction within the circle? Doesn't that mean ride to B and change direction? I am doing a 10 meter circle...oh, you mean around you standing on the center line, not between you and and rail. Years of listening to loud rock music has definitely impacted my hearing, and the wind blowing doesn't help. We laughed at our different interpretations and he explained what he was looking for.

We got some nice leg yields accomplished. Tucker felt fabulous! I can feel the transformation in him and Jen and Bruce notice it. It was a good end to a start that began with vultures attacking themselves!

AND! Jen tacked Imp and rode her...this was the first time Imp has been under saddle since February. She is sound, and as she rode Imp around the dressage ring, with Imp collected and round, they looked fantastic! Bruce wanted to know why she wasn't showing her! Who knows, if Imp can stay sound and get back in shape.....
Posted by TheSecretChronicles at 3:24 PM