Life At the Itty, Bitty Farm 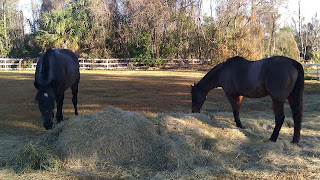 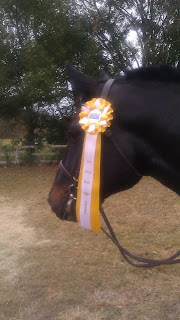 It has been a week back at the itty, bitty farm and all is good! Tucker's itching has been reduced by probably 90%. The hair is regrowing in his face. Imp has settled in and they are both behaving...for the most part, anyhow!
Tucker unrolled the hay roll I bought last week, and has tried to get into the barn when it is closed up during the day, but a good heavy chain to secure the gate has worked much better at keeping the gate shut, much better than the bungee cord I used the first day (seriously, what was I thinking?).
Tucker's stall is nice and neat again and I think that his trashed stall in Geneva was the result of his constant itching. Poor guy, he never had any relief. I definitely made the right decision.
I do miss the vast open space, Nikki's company and having a "real" barn to work in...a barn with big, wide aisles for one! It is challenging keeping a moose like Tucker in an itty, bitty barn. Instead of crossties, trailer ties work better. I remind myself of the pictures I once saw of legendary show jumper Ian Miller's barn. His aisleways in the old barns weren't much bigger! Unfortunately though, the hayroom is too easily accessible and I think I need to install a stall guard above the door to keep greedy horses out of the stacked hay!
It is easier to make some concessions since there are just the two. When I am around, they are free to come and go in and out of the barn.
I was stressing over how clingy Imp would be once I started riding Tucker over in the other field, which is on the other side of the house. Amanda rode him twice this week, staying in the field with the barn, and she followed him like a puppy.
The fretting was for nothing, she barely concerned herself with us going through the gate. A few times she wandered over to the gate to watch, and a couple times today she strolled to the other side of the barn, and then I heard her frantic whinny as she realized she was out of her comfort zone, and she came back over to the gate to check on us. Thankfully, though, no running back and forth or going crazy.
Speaking of crazy, the woman next door has 4 horses on the 1/2 acre. I am planning on keeping a low profile and other than riding in the adjoining field, I have no plans on utilizing that pasture. Hopefully, we will have sold our house and bought a farm and moved before I have to put up any fencing over there!
Our Mane Event meeting was this past week. Tucker's 1st place in stadium at our club rally last fall earned us the 3rd place for all combined entries across the country. Not only did I leave the meeting with a gorgeous rosette, but also as the club's newly elected President. I am excited to help our club enter it's 10th year!
Today was the Longwood South inaugural schooling horse trial. I had been so looking forward to it, until I discovered they were not offering stabling. Since I have to travel with Imp, and was not looking forward to getting up at 4 am, I opted to scratch and will instead look towards the next Rocking Horse schooling show.
I mull over renewing the USEA membership and going to one of the recognized events they are offering over the next few months, but still want to make sure our dressage scores have improved enough to justify the expense of a recognized trial. I think we are there, but need the shows to confirm this.
It is frustrating, it seems something is always preventing us from getting out and showing, but I know that once we have our own place, life will be normal and I will have the opportunity!
In the meantime, we will continue our work and keep plugging away.
I am happy to have the horses so close to home again! I see them two and three times a day.
Life is good!
Posted by TheSecretChronicles at 4:18 PM