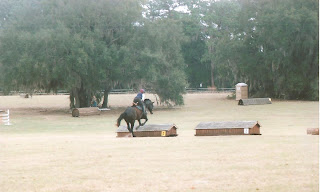 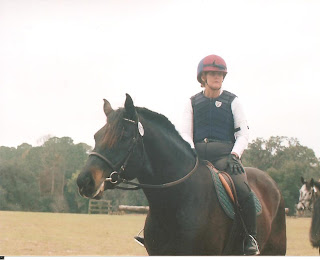 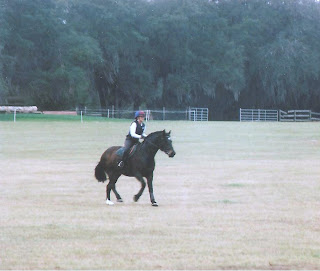 Rocking Horse Stables, in Altoona, Florida, has to be one of the best places for me to spend a day! In years past, I have been there in a supporting role, as horseshow mom, driver, photographer and groom, as daughter Jen competed Impulsive at numerous pony club and USEA recognized events, not to mention clinics, ratings and schoolings. I dreamed of the day that Tucker would be old enough for me to be able to ride him there, rather than me walking around the 100 plus acres on foot! The facility is perfect...endless acre after acre of soft rolling terrain, massive grandfather oaks, flocks of sandhill cranes, the occasional deer and the multitude of cross country jumps, each one a marvel in design.

Yesterday, Jen, boyfriend Travis, new puppy Duke and myself and Tucker, loaded up for a cross country adventure, called an eventing derby. The idea behind a derby is for each rider to go around a course twice. Scores are based on time, with the rider closest to the optimum time getting the most points for the round. The course is comprised of cross country jumps and a few stadium jumps thrown in the mix. Any refusals or rails down amount to time being added to your round. The points are added together to determine the placings. And unlike other events, there is prize money! Best thing? It is strictly cross country...no stuffy dressage tests to perform, just pure bliss of galloping and jumping! Isn't this what eventing is all about?

Of course, with all good intentions thrown out the window, we were late in arriving. Difficulties with the hitch, low air in the tires and Tucker throwing a tantrum at having to trailer alone made for slow going. In the end, with Jen riding in the back of the trailer to riprimand Tucker for his heaving pawing and weight shifting, we arrived just in time for me to get my number! Jen and Travis tacked Tucker while I ran to the office. I grabbed a copy of the map..no time to walk the course, and ran back to Tucker, mounting him and doing our warmup while making our way to the back of the property where the warm up jumps and start box were located. When I arrived, I was told to relax, they were very casual, and even though I was first to go in the beginner novice division, they were not adhering to the order of go and I could just let them know when I was ready. Whew! I studied the map, watched a few trips and then warmed up. After a few jumps, I knew we were ready to go and so into the start box we went. Tucker is so different in the box then Imp ever was...Imp could count backwards and at 3,2,1, she would rear and bolt out of the box at 1. Not so with Tucker. He waits for me to squeeze his sides and ambles out of the box! The first jump, a flower box, was going to come up pretty quick and we had to get our butts moving. We settled into a nice rythmn, but as we approached, Tucker seemed to be a bit caught off guard that we were supposed to jump, and at the last stride, started to stop, but then hopped over it. I momentarily thought we were having a rare stop, but once I realized we jumped it and were moving forward, off we galloped for fence 2. After the 3rd jump was a port-a-pot. For some reason, upon landing after the 3rd jump, Tucker spooked at it and bolted! I was able to pull him back into a collected canter, in time for a stadium jump. We continued around the course, spiraling out, then back in, across the water, which he wasted no time splashing into, out and over a coop, and spiraling back out, to finish on a stadium jump. After a brief rest, we went again for the 2nd trip. Our times were pretty good, we knocked a rail pretty good, but it apparently did not fall, just rattled the cups pretty good. It was a total blast! Our conditioning schedule has really paid off, as Tucker seemed pretty fit and up for the job! Wish I could say the same for me! I felt that I was huffing and puffing! Jen told me my form looked good, that we were forward, consistant and unlike some others, there was no flailing or flapping going on! My leg held up pretty good with the Kinesio taping that my boss applied..since applying it, I have had no pain in my leg from the blood clot when I ride. Who knew that taping could be so good?

Back at the trailer, we untacked, rinsed and cooled Tucker off. With it being winter season, the lower show barns are full with snowbirds. Riders and grooms were busy preparing horses, multitudes of dogs were lying around, enjoying the breezy mid-morning, and there was also a dressage show going on, so the dressage arenas had alot of activity. We decided to go ahead and head for home and loaded the beast in the trailer. He behaved this time...probably was too tired to protest, and we arrived home all in one piece! A little while later, I received a phone call from Alice, the manager of Rocking Horse, informing me of the good news...we had placed 3rd and had won $30!
Posted by TheSecretChronicles at 12:55 PM