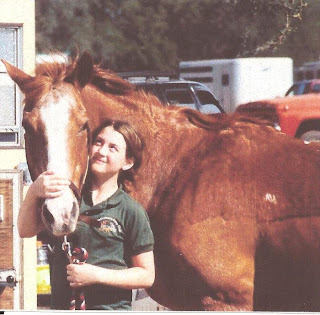 Amanda and Dolly at a pony club meeting. 2004 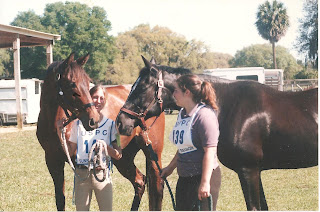 Jen and Imp, Rae and Bubbi after receiving the news that they qualified for the USPC Champs in Kentucky! 2004

In an earlier post, I wrote about the senior horse and how much they have to offer.
I would like to post an update and a tribute to two of those horses I wrote about.

Dolly passed away on December 30. She was approximately 30 years old. I always thought that she would live to be in her 40's. And she probably would have if it weren't for a kick to her knee in the summer of 2009. She was never lame despite the knee remaining swollen. But then last spring, she started to have intermittent lameness and a couple of times there was a discharge from the knee. Then this past fall, she developed laminitis out of the blue. There was really no reason for it..her diet was the same, her pasture was the same...nothing was different. We attributed it to pain from the knee. She got through the worst of the laminitis, but in December, her usual trim was extremely painful for her. She could not stand on either front leg long enough for Kevin to trim her. By this time, the soft swelling of the knee had become hard and calcified. She was having mild colics, which were quickly resolved with some Banamine. However, on December 30, a mild colic bout took a very fast downhill turn and we made the decision to euthanize her.
I didn't realize how many lives she had touched until I heard from many pony clubbers who had memories of her. While Dolly and I didn't agree on too much...she really just wanted to eat and not work at all, the truth was, she really accomplished alot after the age of 20...she learned, quite well, eventing, games and dressage. She attended all these rallies, plus show jumping. On the cross country course, she was often the lead horse, because although she really didn't want to be there, she did do as she was asked. I really don't remember her refusing anything that was in her comfort zone....just don't ask her to trail ride alone! Yes, she was stubborn and really gave Amanda fits at time (but all I had to do was yell at her from the barn in a deep voice "DOLLY" and she would stop being a brat and move on), but she really taught Amanda quite a few things while at it. Yeah, I probably could have put Amanda on a push button school master, but would she have learned as much? I doubt it.
Bubbi, the 33 year old TB/Percheron cross, passed away this past Monday, from a freak accident. How tragic. I cried when I read the news from Rae and Dawn, his owners. Bubbi also touched many lives, especially in pony club. The fact that he was still competing at his age is a testimony to the wonderful care that Rae and Dawn gave him. I will never forget how he and Rae were teammates of my daughter, Jen and her mare Impulsive, for the 2004 USPC Champs in Lexington, Ky. At the age of 26, he gamely made his way around the novice xc course. Imp and Bubbi had traveled the 17 hours to Lexington together, and spent the week prior to the competition working out together twice a day. On the official move in day, we had paid for paddock space to turn the horses out. Imp went in one paddock and Bubbi was several paddocks away. Imp, who quite easily gets attached to other horses, became so frantic, at being separated from Bubbi, we were afraid she would jump the fence, so we had to forego the full turnout time and put her in the stall. She was so mad, she took her teeth and raked them across the wall of the stall. I am sure those deep grooves are still on the wall, and I imagine some famous horse being stalled in that particular stall at the World Equestrian Games, and its rider wondering what could have caused such a mess! By the next morning, Imp was "over" Bubbi, we kept them separate the remaining week as much as possible, and thank goodness, Imp settled down to do her job!
Ironically, 2 days before he died, a copy of Young Rider arrived to the Thomas' residence. Jane Thomas, had competed Bubbi at last falls Dressage rally. He had been chosen as the Absorbine Senior Horse Star. Their beautiful photo is featured in the article! What a lovely tribute.
I am sure that Dolly and Bubbi have joined their friends...Princess, Pilgrim and Teddy, to name a few, and are enjoying the green lush grass to their hearts content. They deserve it.
Posted by TheSecretChronicles at 4:18 PM