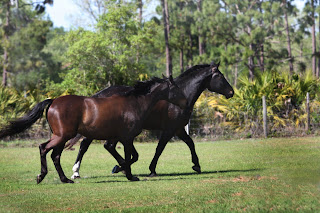 Tucker and Tyke playing in the pasture in Chuluota

So Saturday is our big day..after nearly 6 years of leasing the current barn that I am at, I will be moving my horses, 2 barn kitties and all my "stuff" to a new barn clear across town!
It is a journey that I have been pondering for several months. Back in February, I realized I needed to make some changes. I was spending too much time (and money) on somebody else's property, too much time (and money) on rescues, and not enough time with my family and my own horses. As much as I desperately want to own my own farm, that dream is still at least a year away, until the high school graduation of my last and youngest daughter. I love having my horses in a situation where I control every ounce of their care, but somewhere along the way, I got sucked into a black hole, where I was spending so much time and energy (and money) fixing fence boards, mowing pastures and repairing stalls, that I had no time or energy to ride. With much regret, the rescue was shuttered...no money, no volunteers, no more energy made it an easy but sad decision. Only in existence for two and a half years, Heart Land managed to save and adopt 10 horses plus manage the adoptions of at least a dozen other horses that we were able to send straight from their old home into new, loving homes. That is over 20 horses that may not have had a happy ending had we not intervened. I feel pretty good about that.
We also found a new home for one of our own. We only had Bates for 2 years. He was Jen's new eventer after we had to retire Impulsive in 2008 unexpectedly. Unfortunately, he was a high maintenance Thoroughbred requiring a daily workout 6 days a week, and she started college as an engineering student. Time became scarcer and this past spring some hard decisions were made. He simply could not spend the next 2 years sitting around waiting for her to graduate, with no job, getting older, so he has gone to live in North Carolina at a wonderful eventing farm, where his talents will be fully utilized...horses need and like to have a job!
So down to just 3 horses...my Tucker, Jen's mare Imp and Amanda's mare Dolly, I waited for the right situation to appear..and it did. In July, I found a 6 stall barn to lease in Apopka. Northwest of Orlando, it is in the complete opposite direction of where I am used to traveling, but a new toll road right next to where I work, puts me at the barn in no time at all. Plus, it is just 20 minutes from Rocking Horse and 15 minutes to my trainers barn. In addition, my long time boarder, Tyke, a Dutch WB-TB, will come with us. He is Tucker's best friend and I am so glad his mom, Nikki, is coming with us!
Situated on 60 acres, the barn is one of 6 on the property. I think in its glorious days, it was a standardbred training facility. The property offers rolling pastures, something you only find to the north and west of Orlando, a race track, a lighted arena and more. My barn, a shedrow, has its two own private fields plus access to a larger field for turnouts. The best thing? I don't have to schlep to the barn twice a day. Starting next week, I will have the luxury of sleeping in or being able to clean house or do yard work before work, because the caretaker of the property will bring my horses in and feed them in the morning! Not only that, but I will not be responsible for mowing or repairs! In fact, a deluge this past weekend while we were moving stuff into the barn revealed a leaky roof..how nice to notify Vicki that the barn leaked and could she take care of it? So now, with only having to go to the barn once a day, and not having to do massive barn chores other than clean stalls, I will actually have time to ride! I am looking forward to cooler weather and being able to haul Tucker to Rocking Horse...an impatient traveler, it will be nice to have only a 20 minute drive instead of an hour and a half!
Now we can focus on our goal, making it to a recognized event in January!
Posted by TheSecretChronicles at 4:18 PM