Tucker and I go schooling at Longwood Farms ! 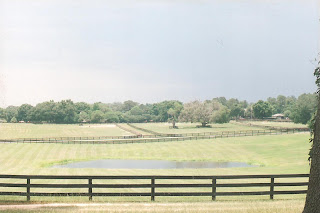 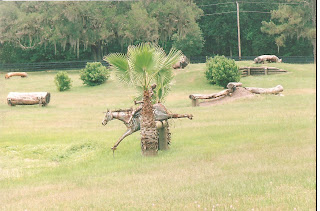 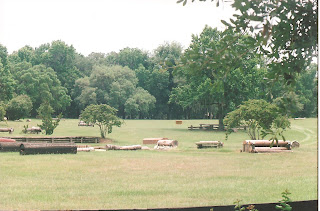 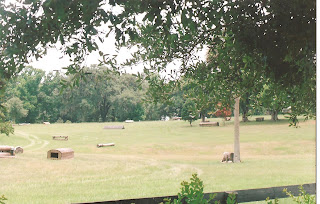 Jennie Jarnstrom, our trainer, invited me to come along for a schooling at the famed Longwood Farm in Ocala last weekend. It was the second time she had invited me this month, but unfortunately, I had to decline the first time, due to not having a traveling companion for Tucker.

Yes, you heard right. You see, Tucker is not the most patient traveler when it comes to hauling. He is ok for about the first 45 minutes, which is the time it takes to go across town from our barn to Jennie's. But anything longer, and he gets impatient. Very impatient. Not really a problem if he was not such a moose. But in my bumper pull, which by the way was built for Tucker...7'6 tall, extra wide and extra long, once he gets rockin' and rollin', the next thing I know, my trailer is not only rocking side to side, but to and fro! At 65 mph on the back roads to Rocking Horse, this is not fun. And, it is not safe either.

But give him a friend to pass the time with, and he is (knock on wood) the perfect traveler! Perhaps he just needs a buddy to chat with:

"Hey, where do you think we're going this time?"

"Last trip we went to that cool farm with all the cross country jumps"!

"Hey, I wonder if that cute little bay mare will be there this time"?

"Gosh, I hope she avoids that road with all those bumps and sharp curves this time"!

I always wondered if on trips that we made regularly, such as taking Imp to Rocking Horse, do they know where they are going? Can they tell by the turns we make, the bumpy roads or even the smells?

Anyhow, I invited my daughter Jen to go on the first outing, but she regretfully declined. Bates was not in condition and she was in Tampa anyhow. Somehow, despite being the best eventing mom there is, the only cross country schoolings I missed with Jen were her outings to Longwood Farm. She, like everyone else who goes there, raves about the beauty of it. She was really bummed not to be able to go. Nor could she go on this last outing, so I invited my friend, Pam Fore, who jumped at the invitation!

4:30 arrived very early last Sunday! My daughter Amanda was also accompaning me, as Jennie was bringing Bella, a sale horse, for Amanda to ride. We arrived at the barn, fed, wrapped Tucker and actually arrived at Pam's at just a little after 6am! This would be a first for Tucker, loading another horse into the trailer after he had already been loaded, but he was a good boy and was very excited to have Copper, Pam's Thoroughbred gelding along for the ride!

We made it to Longwood Farm in Ocala right on schedule, arriving at 8:00. We pulled up behind Jennie's entourage of trailers, which were waiting for the massive gates to be opened. Just from the road, what I could see was jaw dropping!

Longwood Farm is legendary among eventers. It is the site of USEA training sessions and was the home of eventing great, Ralph Hill.

Driving down the tree lined driveway, sweeping fields on either side are full of many cross country jumps of all levels, from beginner novice up to the upper levels. Water complexes, banks, ditches, sunken roads, logs and more. There is even a life-size metal sculpture of a horse and rider, jumping a fence, downwards towards a pond!

The driveway stretches forever, passing the cross country fields, 2 barns, and manicured turn out pastures, before arriving at the main barn, with its stained glass windows and water fountain. Past the main barn, are 2 dressage arenas, a covered ring, maintenance buildings and all along the way, there are several bungalows. We never did see the main residence, which I understand has it's own private entrance.

We pulled our trailers up a hill (yes, a hill!) under the canopy of a pine forest, being careful to manuever around the trees. There were vast pastures to our one side. I never did get to see the view from the top or other side.

We unloaded, Amanda found Bella to groom and tack, and we were all quickly mounted and heading back down the hill, past the barns and out to the cross country fields. The morning was still cool and there was a slight breeze. Thankfully, there were grandfather oaks everywhere to provide shade for when we were stopped to watch the other riders have a turn.

We warmed up, and began popping over little logs, which Tucker usually trips over, as they aren't really big enough to give him an excuse to pick up his legs.

Muscles warmed up, horses and riders both eager and fresh, we were ready to progress in height and difficulty. Our last outing on the cross country course was a year ago, I am sad to say, so I was not interested in over facing him or giving him any reason to have a bad experience. Fun was the name of the day!

And fun we had! We jumped so many different obstacles. I really have a problem with jumping up banks. I can jump down them all day long, but for some reason, going up freaks me out. Maybe because I once saw someone fall and break their shoulder! So of course, on our first attempt at going up the bank, my mind went blank and I shut down. Tucker decided that if I was going to be a sack of potatoes on his back, he wasn't going anywhere, and slid to a stop just in front of the bank. I don't blame him one bit! We circled around, I got tough with myself, looked up and across the bank, and up we went, 2 strides across, down the other side, and then I quickly gathered up the loose reins for the log which was 3 strides after the bank. We repeated it a few times, and I am glad to say, had no more stops.

The other jump I was nervous about, turned out to be my favorite! It was a sunken road, with logs at the top of the hills on either side. The object is to jump a log, landing downhill, going across the sunken road, then up the hill and jumping a log at the top of the next hill. No matter which side you jump, you are landing going downhill. The more I watched the others ride this, the more fun it looked and I could not wait to give it a try! Landing a jump where you cannot see the footing is like being on a roller coaster! It was actually exhillerating!

Our outing lasted 4 hours! Four, butt sore hours, but oh! What fun they were! We went through the water complex (never an issue for Tucker), up and down more banks, over more logs, post and rails, benches, chairs and rolltops.

Amanda had a blast on Bella, too! It has been a year since she took Dolly to Rocking Horse, and months since she last rode. Bella, a former prelim mount, took good care of her and they both looked to be having a good time!

It may not be until the fall until we do another horse trial, but honestly, if all I do are cross country schoolings like these, who cares? Isn't this what eventing is all about anyhow? I mean, no dressage, no stadium. What could be better! I cannot wait for our next outing!
Posted by TheSecretChronicles at 12:37 PM