My horse apologized to me (and other equine emotions) 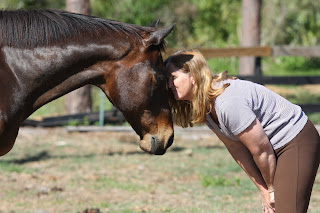 Just listen, I have so much to tell you! 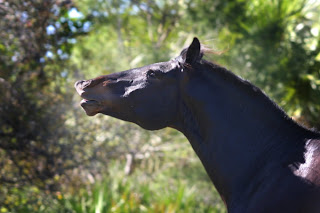 Tucker letting me know his opinion!

So the other evening, Tucker did something that he has never done before...not ever in the 6 and a half years of owning him. Not even when he was a baby going through his, well, his baby phase of tasting everything. He BIT me!
Now it wasn't intentional..I don't think! I had come into the barn in a whirlwind. It was my OPRC (Old People Riding Club...stop smirking, please) meeting that evening and I wanted to arrive in time to hear the guest lecturer, Dr. Fowinkle. So I raced to the barn after work and rushed into the barn, grabbing feed buckets. It was a stark contrast to my normal sedate easy going entrance, where I say hello to everyone and pat the barn cats. So I think the horses instantly reacted to my body language.
I had dumped everyone's feed except for Bates and Tucker. As I was standing in front of Bates stall, about to dump his feed, Tucker reached over from his door opening, which is open with only a stall guard across the front, and BIT me! HARD! On my hip! I have to say, the pain was a bit of a shock, just as much as the fact that he had just bitten me for the first time. My first instinct was to throw an empty feed bucket at him. It made contact with his big ole head and he quickly retreated to the back of the stall. After standing there, getting pissed and thinking, "wow, this really hurts", I finally entered his stall, giving him a good slap on his side for good measure. I dumped his feed but refused to allow him near it..not that he tried. He knew he was in the doghouse and stood his ground, waiting for me to grant him permission to eat. I finally allowed him, admonishing him as he made his way to the feed tub and telling him how much he had hurt me.
Well, I proceeded with my chores, making breakfast, putting the evening hay out in the pastures and turning the mares out front and turning the other geldings out. All I had left was Tucker. But as I approached his stall, he was not in his usual spot, which is standing in the doorway, waiting with his head over the stall guard. No, he was standing with his head in the back corner! Seriously! He had put himself in the corner!
I tried to stifle a laugh as I realized what he had done. I tapped him on his butt, told him he was forgiven, and to come on around.

Well, he turned around and then, proceeded to apologize to me!

How does a horse apologize? Well, he schnuffled me (I think that is a term only horse people use!). I mean, he took his soft muzzle and started, well, you know, schnuffling me! He was running his muzzle up and down my arms. Then he started to lick me! And don't you know, he was very, very careful not to even let me feel his teeth!
He had this genuine look of remorse as he was doing this, and I think if he could have spoken, he would have apologized a hundred times.
Now this is the horse that has broken dozens of fence boards, knocked over jumps for fun during turnout, loses his fly mask in under 2 minutes, and once stepped on my foot, all 1400 pounds on 2 toes which he pivoted on before moving off it, breaking them in the process. Not once did he ever, ever apologize! But here he was, showing me an emotion that I had never seen from him before! It was very touching!
I have witnessed other enduring emotions from my horses. Most notably, humor and scolding.
Have you ever been scolded by a horse? I have!