An Update To Tucker...In Which Life Hands Us Lemons

It is has been a while since I have written. Lots has been going on, including my career. I am now the Florida rep for Noble Outfitters. This came about at a time when I was considering leaving the repping industry and had even gone back to working at a vet clinic....which I hated. The plan was to continue on with some of my lines....I can't ever leave Hilton Herbs, but out of the blue, I had several companies contacting me about repping for them, including Noble Outfitters. I am so happy that I took on Noble, they are an amazing company with a rich history and they are keeping me busy, which I love!
So what is up with Tucker? Well, life threw us a big curve ball in the spring.
Lets catch up, shall we?


First, lets bring you up to date with his allergies & summer sores:
Challenged by allergies since he was about 2 years old, they have been brought completely under control with the use of Hilton Herbs. He gets Bye Bye Itch daily in his feed, I use the topical on his bumps (they are worse in March when the oaks are in bloom, and sporadically pop up the rest of the year) and anywhere else he is itchy and he is bathed only in Hilton Herb's Medicated shampoo.
He will NEVER go out at night again. Horses are here to teach us and Tucker has certainly taught me plenty. I am so sorry for all the years that I turned him out at night, even with a fly sheet on. He was miserable and I should have listened better. He may have limited turnout in the summer, but he is so much happier in his stall, fan blowing on him and hay to munch all afternoon, then dealing with being attacked for hours on end. I truly am sorry Tucker for subjecting you to your own personal hell for so many years.
Last year was a horrible year for summer sores. To recap, the summer sore from hell (just scroll through my blog entries) had never been a problem in the cooler weather, until I moved to a barn in the fall of '13 or '14 and it reopened within a few weeks, despite it being autumn. I fought that sore year round for several years, with last year culminating in what was nothing short of another hell for Tucker, with 3 sores opening on his legs. The ivermectin/DMSO/Fura ointment no longer worked and I was using Dr. Porter's cream, but was fighting a losing battle. The left foreleg was only somewhat under control, after months of being bandaged wrapped 24/7. I was on my way to Rolex last April, and had removed the bandage wrap and replaced them with fly boots as there was nobody in the barn who I could trust with bandaging him daily, and literally, as I am driving out of the barnyard, I look over to wave goodbye to Tucker (what? like you don't wave goodbye to your horse when you leave?) who is turned out in his fly boots. And what do I see? The fly boot has been removed and there is a big spot of blood on his leg. This happened in less than 10 minutes. I got out of my car, crying, walked him back to the barn, re-bandaged his legs and called my vet, pleading with her to come out and to do whatever she needed to do while I was gone. The sore did not close until last fall, after we moved to our new barn.
This is the first summer that Tucker has gone without fly boots on his legs and I don't know who is happier, him or me! So what happened to have such a dramatic turn around in less than a year?
Well, I attribute it to several key things. First, Hilton Herbs Mud Defender has really helped. Developed for the treatment of rain rot and scratches, this antifungal/antibacterial has worked on several horses in treating summer sores, not just Tucker's. Second, moving Tucker has also been a big help. Where he lives now (and will stay until we buy our own farm), Robyn, the barn owner, is diligent in fly management. The manure spreader is emptied daily. If we clean up after our horses during the day, the muck buckets are taken away from the barn until they can be dumped and spread the next day. Golden Malrin fly bait is sprinkled not only in the muck buckets waiting to be dumped but it is sprinkled around the barn and in front of Tucker and his stall mate, Spirits, stalls (poor Spirits, he has had to deal with summer sores not only in his mouth, but also on his penis.) The flies are practically non-existent around the barn. Lastly, I truly believe weed management plays a crucial role in summer sores. When Tucker first developed the sores, I was leasing my barn and I maintained a mostly weed-free environment. What weeds I had were pulled or kept mowed down (how is it a beautiful show barn can turn their eye to knee high weeds in their turnouts?) But when I moved him and they re-opened in the fall, I was convinced that the reason had to deal with the fact that there were weeds in his pasture (which had not been there when I had first visited the farm 2 months earlier....another lesson learned, if you move and several weeks go by before you move your horse in, go back for another visit, as the horse management may have changed.) The next few farms were also full of weeds in the pastures. Because of Tucker's many allergies, this is actually how Tucker's initial summer sore began. One of Tucker's many allergies is to different grasses and weeds. While I didn't really have any weeds in Chuluota, he would come in with tiny sores around his pasterns on a regular basis. They would heal pretty quickly, except for the one that went on to become the summer sore from hell. So I have no doubt that weeds out of control are going to aggravate his skin and cause more outbreaks. Thankfully, where Tucker resides now, pasture management is practiced and weeds are kept to a minimum.


Tucker's EPSM:
I have managed to keep Tucker's EPSM pretty well under control. He continues to get Dr. Reilly's high dose of Vitamin E, magnesium, and high fat. Last fall, we had our best ever dressage score at Rocking Horse, getting a 32 and finishing in 3rd place (we would have won had I not gotten lost in stadium and overshot a fence, resulting in a rare rail down.) I have been pretty convinced that the EPSM would be what ended Tucker's career and was not at all prepared for what happened to us this spring:


In November of 2015, Tucker came up mildly lame in his left front. X-rays showed some arthritis and after a few weeks off, Tucker resumed normal work, only to come up lame again in March of 1016, 3 days before we were to show at our first recognized event. Xrays revealed the same arthritis, so we started him on Adequan injections and Hilton Herb's Joint Mobility. He was back to normal within a few weeks and we resumed our dressage and cross country lessons. Fast forward to March of this year, and Tucker is again lame. Not overtly lame, but none the less, he is slightly off on the left front. Xrays show that the arthritis has progressed and for the first time, I am hearing the term ringbone, which explains the cherry size swelling in the front of his ankle when he was lame. I decide to attack the issue with injections into his joint, which should give him relief for a year or more. I know several eventers who are competing at the upper levels with injections and who are able to go more than a year between injections, so I am optimistic.
After 10 days off, I manage to get in a few more dressage lessons with Bill and Tucker feels fantastic. I am excited and start to make some show plans before the heat arrives. And then, 6 weeks later, I ask Tucker to trot and I feel a bobble. How can this be??? For the next few days, I tack him up, we do a nice long warm up at the walk, but when I ask him to trot, he is clearly off. I ask Robyn and several boarders to watch, hoping that what I am feeling can't possibly be right, that somehow I am imagining things, but no, they all agree, Tucker is lame on the left front.
Kevin comes out and he puts different shoes on, saying that they should give Tucker more support. They don't help, Tucker is still lame. At this point, I not only consult with my vet, but I consult with Dr. Reilly and with Dr. Madison, of Ocala Equine Vet, who performed Imp's knee surgery. The prognosis is grim. They all say the same thing. If it were laminitis or even a fracture, those can be fixed. Ringbone cannot be fixed. Dr. Madison, after seeing Tucker's xrays, advices against anything drastic, such as surgery to fuse the joint. He tells me there is not much success rate in the front leg and he usually does it just as a last resort to help keep a horse comfortable. They all say the same thing. Time to retire him. And so, for Tucker's 14th birthday, that is exactly what I did. I retired him.
I am devastated. I did not back Tucker until he was 3, and did not jump him until he was 6, due to his size. The vets all said the same, that due to his size and career, they are not surprised. But the reality is, when it comes to jumping, he is low mileage and there are lots of big horses out there, doing a whole lot more and lasting a lot longer. Was he pre-disposed to get this? My heart says that all the banging he did in the trailer over the years most likely contributed to this and at the very least, did not help. Was there something I could have done to prevent this? I just can't believe that I have had to retire Tucker at the age of 14.
Now there may be days that Tucker is fine at the trot and canter....he certainly looks sound when he goes out. And I do ride him around the farm, though usually bareback. But the uncertainty of whether he will be sound from day to day mean that I really can't make any plans to at least make him a dressage mount. I don't know, maybe one day I will figure out what to do with him. He isn't really a trail horse, but maybe I could do obstacle training with him. Our house is on the market and once we move, I plan on creating an area where I can do liberty training with him. I know that I need to keep his mind engaged. What does worry me is the effect of not working will have on his EPSM. I already see a change in his topline, and I am certain that a lack of daily exercise will mean that the EPSM will take over his body sooner than later.
In the meantime, it is so bloody hot that I don't think he really minds not doing anything other than eating. He will always have a home with me and a place in my heart. He will be a companion to my next horse and I think that I will have to teach him some tricks! 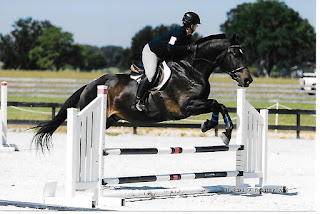 Posted by TheSecretChronicles at 9:16 AM