In Which We Must Still Keep Investigating....

Who doesn't love a good mystery? I know that I do, except when it comes to my horses! I posted a bit earlier about how being a horse owner does require us to investigate mysteries from time time, whether it be to discover the source of an illness or unsoundness or behavior problem.
Problems arose with Tucker a few months ago, which were quite out of the norm for him, and as days turned into weeks and weeks into months, I had a full blown mystery on my hands as I tried to uncover the source. To anyone else, nothing would have seemed amiss, but because I have been riding him for his entire life, I was unsettled that something wasn't quite right. Nothing that warranted a call to the vet, but nonetheless, something wasn't right. He wasn't lame, he wasn't sick. He wasn't being unruly or bad. Just...not quite himself.
So I started with the usual suspects....teeth were floated, the chiropractor came out and the saddle was reflocked. Initially, there was some improvement, and I thought we were good to go after the saddle came back from being reflocked, but then things started to slip again.
I debated calling the vet out, but what was he going to say? I could insist on xrays of his joints, but my gut was saying that wasn't it. So, what did my gut say?
Tucker is a draft cross, so I have always tried to feed an EPSM diet. Equine Polysaccharide Storage Myopathy is a muscle disease which is common with heavy draft breeds, as well as Quarter Horses (where it is called Polysaccharide Storage Myopathy or PSSM). Tucker is Percheron/Quarter Horse, so he is definitely at risk.
However, Tucker has allergies, and the feeds I should be feeding for EPSM usually contained either beet pulp or flax, which he is allergic to. EPSM diets should contain no more than 15% total daily calories from starch and sugar, and at least 25% of daily calories from fat. Horses with EPSM will also benefit from added Vitamin E and Selenium.
EPSM can be triggered at any time, with no reasonable explanation. Symptoms can include muscle wasting, especially in the rear quarters, muscle weakness, work intolerence, poor performance, lameness or gait abnormality, tying up, stringhalt, shivers, irritability at being touched and sore back.
There are 3 ways to diagnose EPSM. The least invasive method is to add fat to the diet for 4-6 months, and if the horse improves, then EPSM is more than likely the culprit.
For immediate results, there is a muscle biopsy, which is dependable, or an endocrine test from a blood sample after excercise, which is not reliable.
I was torn between wanting to know immediately and going the least invasive route. One of the complications of Tuckers allergies is his inability to heal from open wounds in a swift manner. With the summer heat fast approaching, I was leary about opening him up, even for a small incission.
So I added the fat to his diet. He is currently on Cavalor Endurix, which has a high sugar and starch content at 33%..this is the limit that you want to have for starch. The fat is low...8%. According to Dr. Beth Valentine, the leading expert on EPSM, horses with EPSM need at least 1 pound of fat per 1,000 pounds per day. Her approach is that horses gain no nutrition from grains, other than calories, so the approach is to replace starch and sugar calories with fat-based calories. The "added fats diet" is based upon:
I started Tucker on 1 1/2 pounds of Seminole Ultra Bloom twice a day. It contains 20% fat and is low in starch.
Amazingly, within about 2 weeks, I noticed a difference in Tuckers attitude! No longer was he pinning his ears as I tacked him up or asked for a change in pace. He felt stronger and well, he just seemed like his old self.
I was lucky, as most horses can take 4-6 months before improving on the fat diet.
There is so much more information that Dr. Valentine has put out there regarding EPSM diets, so I am not even going to attempt to cover it. Google her name or EPSM and you will get more than enough...and if you still aren't satisfied, there is even a yahoo support group which will totally overwhelm you!
I have debated adding selenium or Vitamin E to his diet. Most supplements contain a combination. Too much selenium is bad for horses, and you really should have your soil tested before adding it to the diet.
I am going to just continue to see how Tucker does and consider adding it if I feel it is warranted.
In the meantime, I am so happy to have my old Tucker back! We missed this winter and spring eventing season, but we have the summer to get ready for the fall! 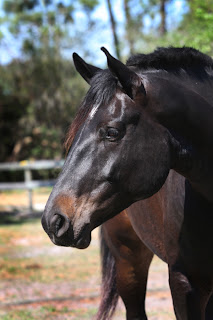 Hopefully, this mystery is finally solved!
Posted by TheSecretChronicles at 7:34 PM