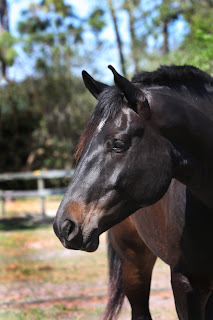 Tuesdays and Thursdays, I arise at 5:30 so that I can be at the barn and on Tucker by 7am. Feel that you missed something? Well, earlier this month, Nikki, who has boarded with me for over 6 years, bought a farm and I moved the horses to her new place in Geneva....hence, the early wake up time.
It is a beautiful time to be on Tucker. There is a mist that is still settled over the field. The sun is just rising, and there is wildlife to enjoy. LOTS of wildlife!
We are entering a schooling horse trial at Rocking Horse in just a little more than 2 weeks. Last weekend, I decided it was time to print out the test (Beginner Novice Test B) and start learning it.
I realized Tuesday morning, the first time trying to ride the test, several things:

1) It is really difficult to learn a test without a dressage ring and letters.
2) It is even more difficult when the field you are riding in was just bush-hogged the week before and is therefore...rough. It is not flat. It is not manicured. There are slopes and the grass is still a good 8-12 inches tall in areas. Prime for stumbling.
3) I am not at my sharpest and clearest thinking at 7am.

So Tuesday morning, I am trying to learn the test. And I am thinking, wow, this is a really difficult test. I am trotting a circle and having to stop, pull the folded up test out of my pocket, study it again, try to figure where M is in relation to K and just where the heck is G, and try again. And again. And again.

Did I mention, that while I am doing this, there are deer and cattle in the field next door? Did you know that cattle and deer EAT horses? Just ask Tucker. He is absolutely convinced that they do!

So we are trotting circles, stopping to read the test, snorting at cows and trying to establish a walk on a free rein...no, Tucker, that does not mean you can trot.
Finally, after an hour, I have to stop. Unfortunately, there is that thing called work that I have to get home to and get ready for.
This morning, I am once again on Tucker at 7. Another glorious morning. Mist, sun, the full moon. Absolutely beautiful. We start out at our warm up walk. And we are walking towards the neighbors field. With the cows. The black cows that eat black horses. The cows that are laying down next to the fence line and purposely shaking their head, just to scare Tucker even more. And of course there are the deer. Frolicing deer. They are celebrating the morning, running about in the field, doing pirouttes.
And then, there are the turkeys.
In the 1970's, there was a tv show called WKRP in Cincinatti. It was about a bunch of nincompoops that run a radio statio. Burt Reynolds then-wife, Loni Anderson starred in it. There was an episode where the station decides to drop turkeys from a helicopter. Except, instead of dropping the frozen kind, they drop live turkeys. Apparently, live turkeys don't fly. The tv audience is left to imagine what must have happened after that line.
So I guess I never thought about whether or not turkeys really can fly. Every turkey I see is walking. They love to cross the road in a single file...never in a group. They love to hold up cars by doing so. Turkey humor.
So I was really surprised, that while trying to convince Tucker that the cows were not going to eat him, I suddenly looked up and there in a tall pine tree, was a turkey. And in another tree, was another turkey. Suddenly, turkeys were gliding to the ground. It was like the WKRP helicopter was dropping turkeys from the sky.
They kept coming. And coming. In the end, there must have been 30 or more turkeys that dropped out of the sky.
Amazingly, Tucker was totally oblivious to all of them...he was still thinking about those damn cows!
Oh, and that dressage test? Well, I must have been more alert this morning. I realized that not only is the test pretty easy, it is pretty short. It was still difficult riding it so it looked pretty, but I think we have the test memorized and will worry about the pretty stuff later!
Posted by TheSecretChronicles at 6:29 AM