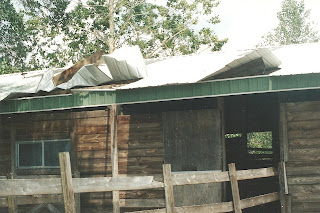 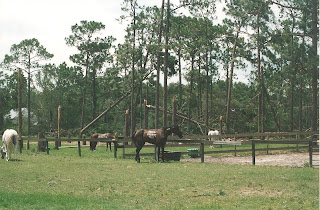 Horses still wearing their ID's on their sides! 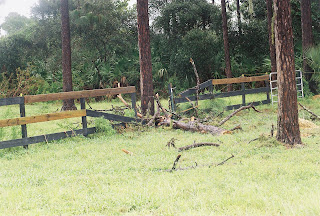 Make sure that horses cannot escape to roadways or downed power lines. 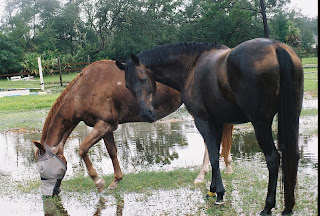 
With the recent devastating events across the southeast, not to mention the wildfires in Texas and floods in the midwest, as well as the upcoming Hurricane season for Florida, I thought it would be a good time to address your disaster plan for your horses.


Don't have one? Well, you should. No matter where you live, you may sooner or later be faced with a natural disaster. At least in Florida, we have the luxury of advanced warning, although as the 2004 hurricanes showed us, that warning may come just 6 hours before landstrike. Unfortunately, in the event of tornadoes and fires, you do not have much, if any forewarning. Nobody could have predicted how horrific these string of tornadoes last week would be and no amount of preparedness could have done any good. You have to place your faith in God or Mother Nature or whomever you believe will save you, and hope for the best.


To paraphrase the Clash, " should I stay or should I go?" should be the first order of your disaster planning.


In the event of hurricanes, you will have several days to decide this. As Hurricane Charlie in 2004 proved however, hurricanes can change their paths at the last moment and therefore, any chances of evacuating are gone. So if you decide to evacuate, leave days beforehand to avoid traffic snarls, long line at gas stations and the risk of becoming stuck on the highway as a hurricane strikes. It is better to evacuate for no reason, then to wait until it is too late.


If you evacuate, know alternate routes. Make sure your truck is gassed up.

And of course, if you are evacuating, take your animals with you!

That is the reason for evacuating, right? If you leave animals behind, there is no telling how long it may be until you can return. It is absolutely heartbreaking to see the photos of animals left behind in the radioactive zone of Japan, including horses. Those animals which are stalled or locked indoors, are dying a cruel and slow death of starvation.


Remember that if you evacuate, there is a good chance that the storm will follow you! Unless you head north and then turn west towards Tennessee or Kentucky, there is a very good chance you will at some point find yourself stuck in the storm. So ask yourself if you want to risk being stuck in a strange location when a storm hits. In 2004, horses that were evacuated to Central Florida from south Florida actually endured more of Charlie's wrath than if they had stayed at home. Barns were damaged, and while there were reports of trapped horses, there were no reported fatalities. And farms that evacuated to Georgia, also ended up bearing the blunt of the storm after it passed over Florida. Sometimes, staying home and keeping your horses in their familiar surroundings is better.


My personal plan is to stay put, unless it is a category 3 or higher and the storm is coming in around the Melbourne/Cocoa Beach area. Being less than 50 miles from Cocoa Beach, I feel that devastation from such a storm would be catestrophic.


So you decide to stay! What should you do to prepare?

To leave in or leave out, that is the question

This is a hotly debated subject. It is a personal decision and sometimes there is no right or wrong answer. In last weeks tornado, one farm that had horses both inside and out, lost all of the horses that were outside. Only one horse inside died, despite the barn being destroyed.
If you leave your horses inside, you risk subjecting them to collapsing roofs and walls. If you have runs off the stalls, it is a good idea to leave the doors open, so that in the event of a collapse, the horses have an escape route.
Horses that are left outside will be subjected to flying shrapnel. The smallest of objects become flying missles. Don't kid yourself...horses left outside cannot outrun a tornado! Tornadoes are moving much faster than a horse can run, follow an erratic path, and may be too wide for a horse to avoid its path. Downed fences make for escapes, so if you turn out, make sure that you do so in an area that is contained by at least 2 fence lines. Many horses that survived Hurricane Andrew in 1992, were killed when they escaped through broken fences. They were either hit by emergency vehicles in the middle of the night, or electrocuted by downed power lines.

Types of ID for horses

Do not include your coggins anywhere on your horse! Somebody who finds a horse that with its coggins, can remove this horse from the area and sell it.

Also, use more than one method of identifying your horse!


Nothing scares me more than fire, because all it takes is for one careless idiot to throw their cigarette out their car window to start a fire. If wildfires are prevelent in your area, leave your horse trailer hooked up to the trailer and have the trailer loaded and ready to go at a moments notice. If you have to work, leave contact numbers for your neighbors, as well as displayed visably for firefighters. A recent dramatic rescue played out recently on the internet, as firemen rushed to a farm to save a horse and a herd of goats in Colorado. Filmed by a news crew in a helicopter, the firemen bravely battled the approaching fast moving flames, saving the animals. A followup news story revealed that the owners were at work and rescue crews would not allow them to go home and save their animals. This is why it is a good idea to evacuate ahead of time. Better to be safe than to have to risk the aforementioned scenario.

In the event of flooding, you need to evacuate as soon as possible. As with wildfires, you cannot afford to wait.

After Tropical Storm Faye, in 2008, our farm was about a foot under water for weeks. I was initally concerned about snakes. The real threat however, were ants. Did you know that ants float? I didn't. Fireants will attach to each other and form a floating island. I quickly discovered that leaning on the fence was a painful experience, as ants sought refuge here. Sadly, a man died near my barn after coming in contact from a floating ant island.

In the event of tornadoes, I really don't think there is much you can do, other than to seek shelter and pray. One house may be totally destroyed, leaving their neighbor unscathed. Just as in hurricanes, I will take my chances and leave my horses inside. I will risk my barn being destroyed over having my horses impaled or electrocuted.

Now is the time to plan and prepare. Know your options and devise an emergency plan now!


Thank you to the Chuluota Fire Department and Dr. Jennifer Fowinkle for their contributions that allowed me to write this blog!
Posted by TheSecretChronicles at 9:01 AM