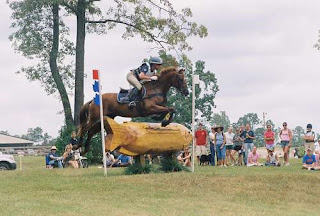 So as I think about what to write for my first ever blog entry (welcome to the 2010's, Lori!), I am conflicted about what to write about. An aspiring, wanna be writer, I have so many ideas in my pea brain..do I write about my dysfunctional childhood, my wonderful husband and kids, my horses, or things that tick me off (like smokers who throw their butts out their car windows, not only risking a fire, but dammit, LITTERING!!). I hope that by blogging, I can start to organize my thoughts and try to get focused, as well as hone my skills.
(Photo of Karen O'Connor and Theodore O'Connor, the most amazing Pony! Photo by Lori Tankel)

But since it is the last weekend of April, and I am a horseperson, I gotta write about ROLEX!

No, not the watch! Every horse person, whether they ride western or do the hunters, knows what ROLEX is. I mean, to prove my point, this weekend at work, I was explaining it to a co-worker, who is not a horse person and thereby does not know what ROLEX is. I was telling her how Great Britains 2 entries, William Fox Pitt and Oliver Townsend, had to go to great lengths to arrive in the US, thanks to that volcano in Iceland. Oliver managed to get to Paris, then pay $3000 to take a taxi to Spain, where he took a plane to Miami, then on to Lexington. WFP had a similar experience, though I read he missed his connection to Spain and convinced a neighbor to fly him there in his private plane. I am sure this could be a sequel to Planes, Trains and Automobiles, the British version! Anyhoo, a waiting client who is listening to our conversation, pipes up and asks "Rolex? As in the 3 Day Eventing Rolex?" Oh yes, sweetie..you annoyed me by showing up late to your appointment, a no-no for a newbie, but now that I know that you are obviously a horseperson, I will now give you the time of day! Turns out she is a Hunter rider...and of course, the horse world being a very small world, I know her trainer, she bought a horse from my trainer, etc, etc!

So ROLEX! ROLEX to the eventing world is like what the World Series is to baseball affectionadoes, the Super Bowl is to football nuts and the Playoffs is to basketball fans...I think they call it the PLAYOFFS for basketball. I dunno... my husband got tickets to a Magic game a few months ago and dragged me along. I thought my kids high school soccer games were more exciting.

ROLEX is the only 4 star event in our country. I will save the history of the 4 stars to those who want to go to http://www.useventing.com/, or http://www.rk3de.org/, both of which has a good article on it.

I think most eventers dream of riding in ROLEX, though if given the opportunity, I think most would chicken out. I know I would! I grew up doing the jumpers. I admired the pictures of the legendary Bruce Davidson in the Chronicle of the Horse. I was asked if I wanted to event my jumper, Sir Tally, but you know, those jumps don't fall down my trainer reminded me. But then my daughter, Jen, joined the United States Pony Club, and before I knew it, she had an incredible eventer..a story in itself for another blog. We were eventing, or rather she was..and I was the ultimate cool horseshow mom. I trailered, groomed and pampered the hell out of Impulsive, her new mare. And I realized something about events, or horse trials, pretty early on. These people are awesome! I can be standing next to Olympian Karen O'Connor and she will warn me about a sticky spot out on the cross country course. Or Canadian coach Peter Gray is asking how Jen and Imp are coming along. Wow! At a hunter/jumper show, riders of this calibre would give low lifes like us the brush off and wish we break a leg. And, I learned at my first HT, you have..ready?....ASSIGNED RIDE TIMES! So unlike a hunter show, where you awaken at 4am, get to the show and sit around and wait for your class, because there is always a hold up, at a HT, you have ride times! So you always know when you are going to ride. What a concept! So I became hooked on eventing and in what will be another blog at another time, finally made it to my first HT last year on my very own Tucker, who I raised and broke myself. But event at the 4 star level? Hell, no. Not even the 3 star level! In fact, I don't really see myself going beyond novice, although I have been told repeatedly that Tucker can go well beyond that. But in my dreams and I think most eventers, yes, they dream of competing at ROLEX! I do think that Jen will one day ride in ROLEX! She really wants to! And she was already schooling at the Intermediate level with Imp when we had to unexpectedly retire her...to me, it will be more exciting to watch Jen ride there then anything else!

I have not made it to ROLEX. Every year, I say I am going, but I don't. One year, we will make it. Maybe when Jen graduates from college in 2 years and doesn't have finals in the way. So in the meantime, I check the Leaderboard several times a day, I read up on the COTH bulletin board and read about it on the USEA website. I am not one to subscribe to the live streaming, because if I did, my horses wouldn't get ridden and there would be no clean laundry for the week. Instead, I count the days until NBC airs it..this year, May 15, prior to the Preakness. And because it has become so popular, they have increased the coverage from 60 to 90 minutes! WooHOO!

Thankfully this year, there were no serious injuries, no fatalities. Poor Oliver, after all he endured to get there, he had a bad fall on the xc and was airlifted. Thank God, he is ok, the horse is ok, but he was kept overnight for examination so he could not continue on his other mount. WFP, for all he went through, DID win with Cool Mountain! He is an amazing horseman.
Horses routinely humble us, and they didn't disappoint at Rolex. Kim Severson was in 2nd after xc, only to have a disasterous show jumping round today and drop to 24th on her lovely gray, Tipperary Liadhnan. There were several withdrawals on the xc, some did not pass the vet inspection today, and others, well, it just wasn't their weekend, but hey, there is always the next time, right? That is always the mantra for horseman, no matter what our level..there is always next time. And for me? Well, there is always next year..maybe we will make it to ROLEX!
Posted by TheSecretChronicles at 2:45 PM